The Cendere Bridge was built in the first years of the third century after Septimius Severus defeated Parthians, captured Ctesiphon, and added Mesopotamia to Romans. The old line of defense along the Upper Euphrates was no longer necessary. The area was reorganized and in 203/204 CE, soldiers of the Sixteenth Legion Flavia Firma bridged the river Chabinas (the modern Cendere River) with a new bridge. 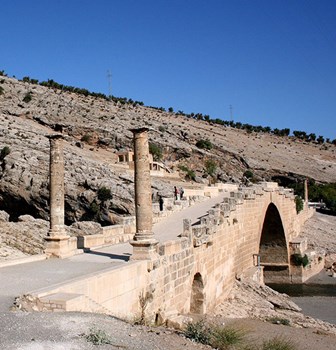 The construction of the bridge, which was paid for by "the four towns of Commagene", is 118 meters long and connects the road to Mount Nemrut. On each of the bridgeheads were two pillars with a statue - one for the emperor, his wife Julia Domna, and their son Caracalla; but when Geta was killed in 211 AD, his named was erased from inscriptions and his statues were removed.

The Chabinas (Cendere) River flows through the Keban Dam and joins the Euphrates near Adiyaman.