Balıklıgöl (Pool of Abraham or Halil-Ür Rahman Lake), is a pool in the heart of the of Şanlıurfa, known in Jewish and Islamic legends as the place where Nimrod threw the Prophet Abraham into the fire. The Balıklıgöl and Aynzeliha water pools are among the most visited places in Şanlıurfa.

The majority of Jewish, Christian and Muslim commentators believed Urfa to be the birthplace of Abraham, and the cave that is close proximity to the pool is believed where Abraham was said to have been born. 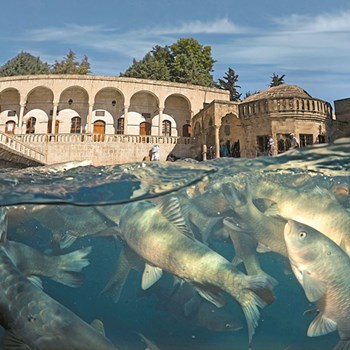 It is believed that Prophet Abraham did not follow the religion of Nimrod and therefore he was thrown into the fire by Nimrod to kill. As Abraham is a follower of God, he was not killed by the fire. The fire was converted into the water and the firewood became the carps that you can see in the pool.

Modern Balıklıgöl remains a popular site for devotees and tourists alike, with tens of thousands of visitors arriving each year. The carp in the pool are still considered to be sacred and people are not allowed to catch or eat them. Instead, visitors are encouraged to feed the fish.

The step daugter of Nimrod, Zeliha falls in love with Prophet Abraham. Zeliha begs and prays for Prophet Abraham to his step father Nimrod. As she realizes that Prophet Abraham is fallen into fire, she casts herself into the fire as well. The place where Zeliha falled is called as “Ayn-ı Zeliha Lake“ and it is located right next to the Pool of Abraham.

Sanliurfa Castle, overlooking the Pool of Abraham, is believed where Prophet Abraham was thrown with the help of a catapult.