Zinciriye or Isa Bey Madrasa was built in 1385 by Melik Necmeddin Isa bin Muzaffer Davud bin El Melik Salih, who was the last Artuqid Sultan ruling in Mardin. Locals call it as Zinciriye Madrasa due to its cusped domes on the east and west edges and high monumental portal in the east side. 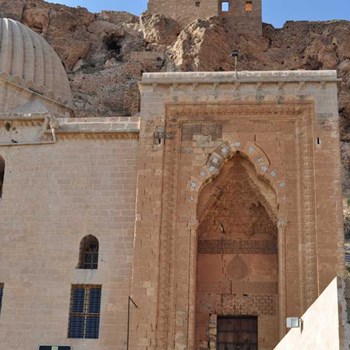 The building consists of a large courtyard, two floors of mosque and crypts, along with other spaces. It is entered from the central porch; there are corridors that lead to it or visitors may enter through an opening in the star-shaped vault at its center.

In the middle of the mosque is a squinched dome which is decorated with inlaid designs. A mihrab, located in a corridor on the south side, denotes one's way to an elevated place covered by a squinched dome that appears to be a tomb.

Though most surviving rooms on the upper floor are small, they once belonged to the students attending school in the madrasa. Melik Necmeddin Isa, a noble who fought back Timur when he first invaded Mardin and was imprisoned for it afterwards, was held here as well. Mardin museum is housed inside Zinciriye Madrasa until it moved into its own building.