Zelve is located about 10 km far from Goreme and about 7 km from Avanos town. In this village, Christians and Muslims lived together peacefully until 1924, when expulsion of minorities signalled their inevitable departure. This happens again in the 1950s, due to erosion danger; they left this site and set up a new village further on, naming it Yeni Zelve (or Aktepe).

Zelve is an open valley with a large cave settlement on the northern slopes of Aktepe, 1 km from Pasabag Fairy Chimneys. Zelve does not have as many rich frescoes as Göreme and other Cappadocian sites but contains innumerable rooms and passages that house many pointed "fairy chimneys" with stems at about 40 feet above the valley floor. 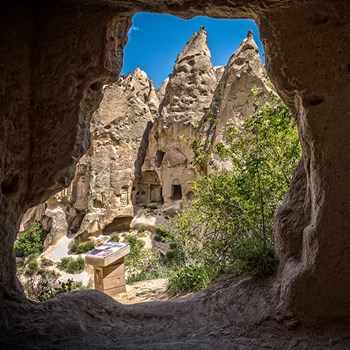 Zelve was a monastery between the 9th and 13th centuries. Christians fled here during Persian and Arab invasions. The earliest seminaries to train priests are located there, at the monastery in Zelve. The Direkli Church (with famed columns), which dates back to early seminary life, is also featured at Zelve.

Direkli Church is located at the bottom of slope. It has high relief iconoclast crosses as its main decorations, and dates from before the Iconoclasm era. Visitors can also find Balikli Kilise (Fish), Üzümlü Kilise (Grapes) churches and Geyikli Kilise (Deer church). These were built during the Pre-Iconoclastic period.

In 1967, Zelve was turned into an open-air museum. The valley contains a mill and other small houses as well as the two valleys linked by a tunnel. There are also pigeon nests in the area.The churches at Zelve are not as many or as impressive as those at the more famous Göreme Open Air Museum; however, it features more dramatic topography and more freedom for exploration.