In the Solhan district of Bingöl, the Zağ Caves which are 5 stories high and were used as a secret settlement for Christians who lived under the pressure of the Roman Empire during the period when paganism was dominant, arouses admiration.

The Zağ Caves in Solhan district, which is a historical heritage from the Byzantine period to the present day, where Christians living in the Roman Empire in the 5th century AD, performed their worship secretly, were used as a place where Christians who were oppressed for many years hid, worshiped and lived in secret. 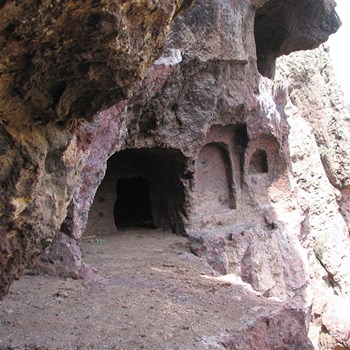 The cave consists of five separate floors and is 300 meters above the ground on the side facing the Murat River. The architecture specific to the period it was built is what draws attention. The transition between floors is provided by round chimneys, and the transition from room to room is provided by doors.

Each floor has 5 or 8 rooms. One of the most important parts of the structure, which was built as a rock settlement, is the presence of secret passages in the form of chimneys. Access to all rooms is provided by these secret passages. There are two rock-cut cisterns, especially in the secret passage area on the 1st floor. We think that this cistern, covered with white plaster, was used as a water reservoir by Christians who believed in one god, fleeing from Pagan beliefs.

Cube-shaped pits carved into the bedrock floor and plastered inside in some rooms were used as storage for grain, oil, and liquor. In some smaller spaces, it has been observed that offering deposits are made. Caves/rooms were also seen being utilized as living reservations with kitchens/pantries or prayer rooms.