The Yumuktepe Tumulus is located within the city borders of Mersin, Turkey. In 1936 it was at the outskirts of Mersin; however, due to population growth over time and urban sprawl, the tumulus now lies in the Toroslar municipality of Mersin.

Excavations during 1936-1938 by British archaeologist, John Garstang (1876–1956), have revealed a neolithic settlement which continued up to medieval ages. However, excavations halted during World War II and some documents in the Liverpool University were lost after an air raid. After the war, John Garstang as well as Veli Sevin of İstanbul University and Isabella Caneva of Sapienza University of Rome continued the excavation. 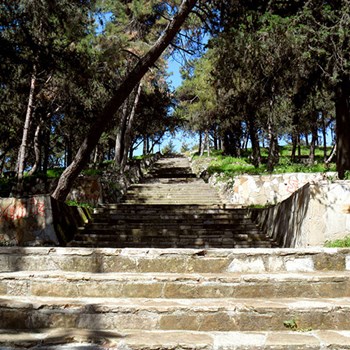 There are 23 levels of occupation found in Yumuktepe that date back at least to 6300 BC. Garstang, in his book Prehistoric Mersin, listed the tools unearthed in the excavations. The earliest tools were made either of stone or ceramic and both agriculture and animal husbandry (sheep, cattle, goats and pigs) have been identified among economic activities.

One of the first fortifications in human history, which existed between 4500 and 3500 BC, can be found at Yumuktepe. Isabella Caneva notes that during the Chalcolithic age an early Copper Blast furnace was being used here. Yumuktepe was probably a coastal settlement that is now 2.5 kilometres (1.6 mi) away from salt water because alluvions carried by the nearby Efrenk River have covered this urban mound to a depth of 2 meters (7 ft).

Yumuktepe, a part of the Hittite Empire's vassal kingdom Kizuwatna, is also mentioned in documents dating back to 1440 BC. In those ancient texts Pitura was a city mentioned close by to Yumuktepe and might be the settlement’s original name. However, recent research suggests Elipru as its true name. It was attacked by Sea Peoples from Europe in 13th century BC.

A second blow was dealt to Yumuktepe by Assyrian Empire from Upper Mesopotamia. During Roman Empire, a small city named Zephyrium was established to the south of Yumuktepe. But Emperor Hadrian (reigned 117-138) renamed the city as Hadrianapolis. During early Byzantine era, the nearby settlement of Soli (10 kilometers at 10 Mi west) flourished and Yumuktepe further lost its former status.