The Grand Mosque of KutahyaPlaces to Visit in Kutahya

The Grand Mosque of Kutahya

The Grand Mosque of Kutahya is also known as Yıldırım Beyazit Mosque, which began construction in the time of Yildirim Bayezid (1381-84) and was completed in 1401. The mosque is the largest and most beautiful in Kütahya. 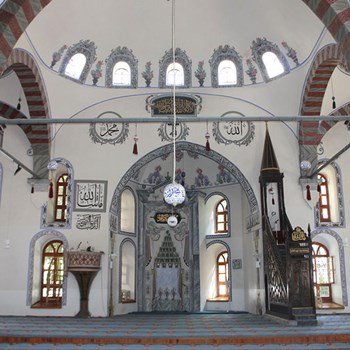 The rectangular planned mosque that was repaired by Mimar Sinan during the Rhodes expedition of Sultan Suleiman I, the Magnificent, was built in 1893. During Abdulhamid II's reign, it was repaired and took its final shape.

This mosque covers 45X25 square meters, containing a minaret in the northeast corner and doors in three directions - one leading to Sakahane. Columns within the mosque are from Aizanoi's ancient city.

There is a small fountain inside, which rests above an ornate mihrab. The main space of the mosque features two side-by-side domes supported by six columns and half-domes on the sides. A tiled panel with the Kaaba depiction on the right of the protruding mihrab is worth seeing.