The Yılanlı Mosque, one of the oldest structures in Kastamonu, has been constructed in the last period of Anatolian Seljuk State in 1273. This mosque and complex has played a significant role in Turkish-Islamic Civilization for centuries in Kastamonu.

Under the Ottoman Period, this building was known as "Darü'ş-Şifa" and functioned as the Faculty of Medicine (hospital). Those who wanted to study medicine were educated here. 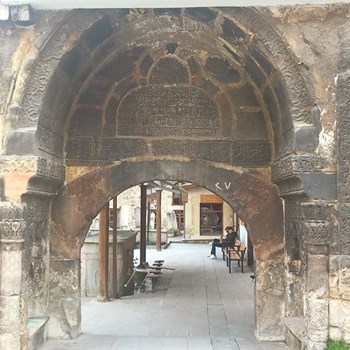 Darü'ş Şifa, one of the institutions where medical education was given in the Seljuk and Ottoman periods, was built by Ali, son of Süleyman (Ali's grandfather), who ruled as a Pervaneoğulları principality. The architect is Küherbaş. Darü'ş şifa saw partial destruction in 1837 when an accidental fire burned down most of its building. Only the entrance door has survived to this day with traces from 1837 fire visible even today.

There are 25 sarcophagi inside the tomb. The metal casket belonging to Abdülfettah-ı Veli (an important person in Islam), grandson of Abdulkadir Geylani, is on the east side of Yılanlı Mosque and its entrance is inside the mosque. Other coffins belong to their children and grandchildren but there are two exceptions.

The mosque, which was built at the same time as Darüş-Şifa, was rebuilt after the fire in 1837.

Two fountains which were likely built at the same time as the other structures of this complex, draw attention with their plant-motif decorations. Finally they were restored in 2006 by the General Directorate of Foundations.

The courtyard gates of the original Seljuk era survives. One example is the Crown Gate, which has an important place among the crown gates of that period and remains at its original height and width today-four meters high and two and a half meters wide.

The belt pediment reads this inscription: “In the name of Allah, the Most Gracious and Most Merciful. “We have sent down the Qur'an as a cure and mercy to the believers.” The Prophet (SAW) said: 'O servants of Allah! Get treated. Surely, Allah has created medicine for all diseases. When you think that Yilanli Complex mostly served as a faculty of medicine, the writings on the door make a lot more sense that the God created the cure for everything, but people should look and find the medicine.