The Yelmaniye Mosque is located at the top of a hill in Tepebaşı (Medrese) District, in Çemişgezek District Center. It was built by Emir Taceddin Yelman for use as an Islamic school (madrasa) during the Timurid period from 1400 to 1407. 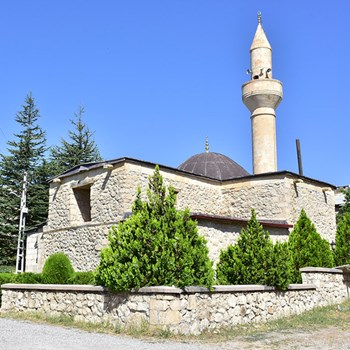 The building is also known as the Madrasa Mosque because it was used a mosque, later on. There are traces of other structures around the building, which have been modified and repaired regularly. The foundation that lies in its southern part implies this mosque would have been found among other buildings.

The main section in the south is for educating, and the north part contains student rooms, a soup kitchen and more. The only area that has been preserved with originality is the crown gate in the form of an iwan on one side of the mosque's western façade; it was made from carefully cut stone on a sloping hill. Stone belts with geometrical patterns surround its entrance, which looks great despite any changes around it.

The octagonal, geometric columns at the entrance rotate when the door opens. The space is decorated with a single dome and contains no minaret; however, the space's mihrab decorating with green tiles sets it apart. The mosque has a single dome and does not have a minaret, so it is transitional between Seljuk style and Ottoman style.