YazilikayaPlaces to Visit in Corum

Yazılıkaya, a site 2 km to the northwest of Hattusha Ancient City, was the Open Air Shrine of the Hittite Empire. Yazılıkaya consists of two rooms and a Hittite temple in front that reflects many aspects of Hittite architecture.

In the Yazılıkaya open air shrine, there is a Big Gallery which is named as Room A and a Small Gallery which are both built into natural rock. The west wall of the Big Gallery (room A) is decorated with god reliefs while the east wall is decorated with reliefs of the goddesses and the figures on both walls face the section where the main scene is and the east and west walls join the north wall. 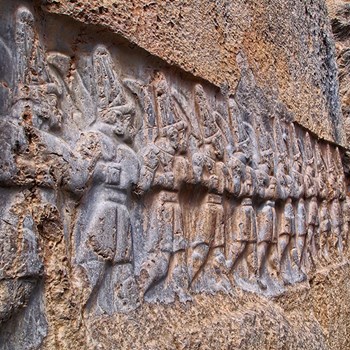 Gods and goddesses are usually depicted wearing pointed hats, belts, shoes with upturned points, and earrings. They generally carry a sword or mace in one hand. Goddesses wear long skirts while gods have short garments belted at the waist. Both deities also sport cylindrical headdresses on their heads.

The north wall in which east and west walls meet depicts a central scene of the chief gods. On this elevation, we can see Mountain God Teshup standing above air gods, his wife goddess Hepatu and son Sharruma accompanied with a double headed eagle. The relief of King Tuthalia IV is on the east wall and it is the largest relief of the gallery.

The small gallery, which has its own entrance and is guarded by a winged lion-headed human-bodied genie on each side.

Twelve gods of sword are depicted on the west wall of Room B and King Tuthalia IV, under protection of God Sharruma is shown on the east wall. Besides well preserved reliefs, there are three carved niches in this section which are assumed to be for gifts or the ashes of a Hittite royal family.

With all these features and the inclusion of spaces built at the front, Yazılıkaya has survived to our times as a Hittite shrine.