There is an archaeological site in Yazılıkaya, a village in Eskişehir Province, Turkey. Yazilikaya is known for its Phrygian remains and inscription mentioning King Midas.

The earliest traces of human settlement discovered near Yazılıkaya are from the early Bronze Age, with nothing indicating that the settlement persisted and its most important monuments arose between 800 and 600 BC. At this time, it was the second most important place in Phrygian civilization besides their capital city - Gordion. It was guarded by four fortresses on nearby hills - Akpara, Pişmiş, Gökgöz and Kocabaş. 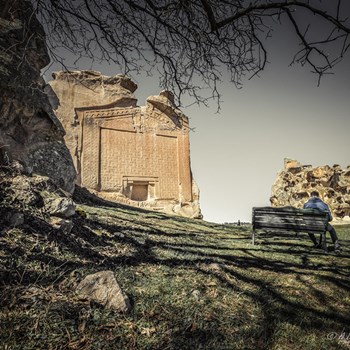 The Phrygians seem to have left the Yazılıkaya area after a period in history around 500 BCE. Structures and inscriptions found nearby indicate occupation of these areas in later periods - around 300 CE (300 years from the Migration Period) as Hellenistic, Roman, and Byzantine cultures colonized Anatolia.

The most important and the most spectacular structure at Yazılıkaya is called the Midas Monument. It is a beautifully decorated limestone façade that dates back to around 500 BC or earlier, carved into the vertical rock. It resembles an entrance to a temple, but what appears to be the threshold of the goddess Cybele's ethereal abode is actually only carved out as a shallow niche.

The façade of the structure is square with a side length of 16 meters. It is an imitation of the Phrygian megaron, a rectangular structure with a deep hall in front and only shallow porch or entrance at back. The niche, carved into the rock has geometric patterns around it to resemble a maze; this was topped by an acroterion that has not been preserved until present day.

Above the façade of this monument is an inscription in Old Phrygian, which states that a certain Ates, perhaps a priest, dedicated it in honor of King Midas. Because many rulers bearing this name ruled over Phrygia, researchers are unsure about to whom this monument belongs.