The Yakutiye Madrasa (Yakutiye Medresesi)Places to Visit in Erzurum

The Yakutiye Madrasa (Yakutiye Medresesi) was commissioned by Khwaja Yaqut, the Ilkhanid governor of Erzurum, in 1310.

A madrasa is a rectangular building centered on an enclosed courtyard with the main entrance located to the west side of the structure. The main entry consists of a double door leading to an alcove framed by ornaments on three sides, all covered in intricate detail. The ornament on the west side of the façade consists of an inscription band running around spandrels, followed by a vegetal pattern based on split palmette motifs, then another geometric pattern and finally a sculptural vegetal design. The top and bottom of each panel are decorated with a tree of life motif. In the center is an eagle while at the base there are lions. 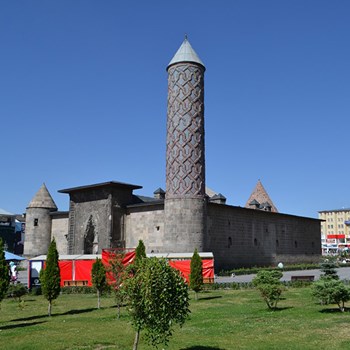 A cylindrical tower with a conical roof rises on either end of the west façade. The southern tower is taller and thinner, decorated with a strapwork motif in brick. The northern tower is shorter and wider without decoration.

After passing through a square vestibule, you enter the madrasa on the north side. It has four vaulted bays that converge around a central bay capped by a hexagonal roof with three skylights. The bays are supported by four piers and each one is framed by muqarnas.

The west wall of the mosque is a barrel vaulted bay with an entrance vestibule, while the north, south and east walls are composed of bays that give onto open iwans. The cells line the roofed courtyard where there is also a mihrab on one side and an octagonal tower at its east end.Judging by the outside, this octagonal tower appears to be decorated with blind arches and a conical roof.