The Virgin Mary MonasteryPlaces to Visit in Giresun

Virgin Mary Monastery in Şebin Karahisar, a district of Giresun Province, is a monastery having multiple structures such as dining hall, dormitory, church and classrooms and more. The Virgin Mary Monastery dates back at least to the Byzantine period. The monastery resembles the well-known Sumela Monastery, which the sources estimate was completed in late 4th century and is located within a cliff as well.

The monastery is carved into a single rock, accessed via an entrance with 26 steps and then floors accessible by stairs. The lower level is cistern water while the upper level has a church which extends through four levels. 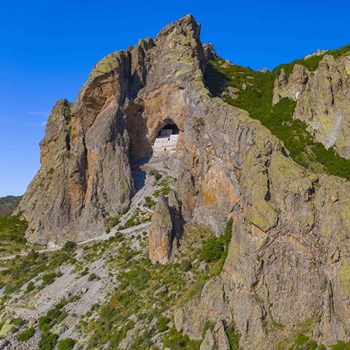 There are four floors in the monastery building. In the first three there are 32 rooms for different services, like hall, kitchen, toilets etc. It is claimed that it was built during medieval times and then burned down in one huge fire before being rebuilt in 19th century.

The Greeks living in and around Giresun, Ordu, Trabzon and other areas had been coming to the city for three days starting on 26 August until 1940 for worshipping purposes.

Located near the Şebinkarahisar district, Virgin Mary Monastery has a significant place in terms of faith tourism with its location and architecture. The monastery's masonry is made up of cutting stone carefully can be found at other monasteries like Sumela Monastery in Trabzon.