Vank ChurchPlaces to Visit in Bingol

Vank Church is located on a steep slope between two hills, three kilometers away from the village and up a high hill. It was built by the Armenian community that used to live in the area and thought to be at least 300 years ago, with its entrance façade being made of smooth cut stone. The most original part of the artwork is its door, which includes an arched frame that employs regularly cut white stones on top and bottom.

Numerous crosses are engraved in different shapes and sizes on the stones of the door. The window is carved into a niche at the top, while two slots for candles line either side of it. Thieves stole the two-winged door in the 1970s, which had high artistic value, inscription, and embossed human-animal figures made of coconut walnut. 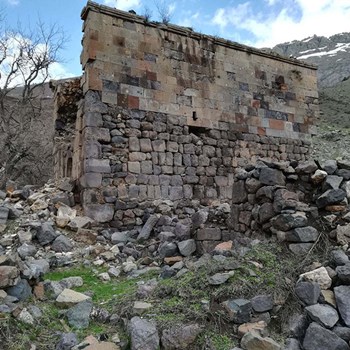 The iron jamb of the door is preserved in the Elazig Museum. The roof is shaped like a flat roof and covered with earth. Two gargoyles cast in the form of lions are allowed to drain rainwater from the roof through their mouths.

The interior of the building is split into two parts. The first part is a large, high-ceilinged hall and the second part has a more narrow height with a round barrel vault. This area is also tiled in black and white squares set perpendicular to one another. As time goes by, erosion makes it possible for some stones from the foundations to be seen through gaps in the tiles -- supporting its square shape with an elegant dome made of hard brick bricks at its zenith point.

The apse is 90 centimeters high. It's reached from the left by a stone step and it features symmetrical niches on each side. At the base, in the middle, there is a flat table made of brick placed on a half-meter column. Traces of writing have been found on some stones southwest and west walls of the church; another building or part of the church was visible when piles of stones were littering this area.

Historical stones from the old church, such as engraved birds, a cross in a circle meant to signify wheat and a stylized wheat ear were used in the newly built house next to the church. A large single cross relief is seen on one of the tombstones suspected to have been brought over from an older section of land nearby.