The archaeological site of Uzuncaburç, or Diocaesarea, is located in Mersin Province, Turkey. The remnants of the ancient city can be found at this location.

During the Hellenistic period, Uzuncaburç was part of the Seleucid empire and Uzuncaburc belonged to local kings who administered for the empire. Olba’s main settlement was in Ura 4 kilometers (2.5 mi) east of Uzuncaburc site while their sacred place was Uzuncaburc. In the 4th century, Emperor Vespasian expanded Diokaisareia into a city with the right to issue its own coins. During Christian times many temples were converted into churches. 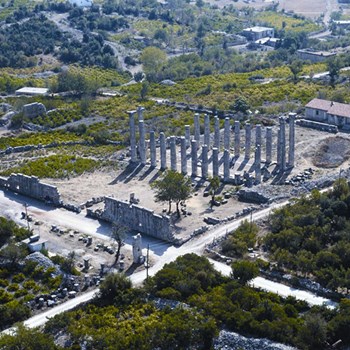 During the Middle Ages, the city's population faded away. During Ottoman Empire time, a settlement of Turkmen people to the east of the ancient site was founded and named after Uzunca Burc (Bastion Tower) in Turkish. Both settlements have since shared names.

The ceremonial gate was on the east side of the temple site. Only six columns remain, which had a radius of 1 meter (3 feet) and were 7 meters (23 feet) high. It is possible that small statues were erected on consoles in each column before they collapsed. The main entrance to the site is at the northwest corner and consists of one monumental gate and two auxiliary gates.

Zeus Temple: Zeus Temple is in the middle of the archaeological site. It is a peripteral type temple. 36 columns survive and were probably commissioned by Seleucus I Nicator (ruling 305-281 BC). The temple of Tyche is at the west end of the site. It has five columns 20 feet in height. The temple was commissioned by Oppius and Kyria, according to an inscription.

The Hellenistic Tower: The Hellenistic tower is located close to the north-east corner of the walled site and has a base area of 16 meters by 13 meters. It stands at 75 feet (23 metres) in height and was commissioned by Teukros, son of Tarkyaris. The tower likely served as an escape shelter during wartime with its size capable fitting whole families inside.