Uşak Museum of ArchaeologyPlaces to Visit in Usak

Uşak Museum of Archaeology is an archaeological museum that is best known for its exhibitions of Karun treasure, located in the city center.

In Usak Museum, items on display include sculptures, pitchers with beak-like spouts and stone axes from the Bronze Age, earthen dishes and glassware from the Hellenistic as well as Ancient Roman Periods, and stelae from the nearby ruin site of Blaundus. The most interesting pieces are those belonging to what is known as the Karun treasure of Lydian Period. 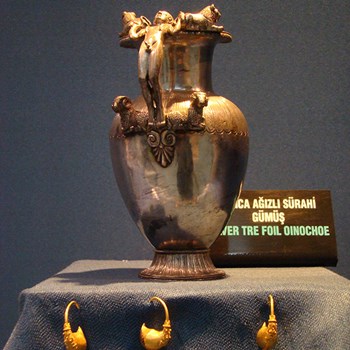 In the main museum hall, a chronological display of pottery, stone tools and similar artifacts is stored in showcases. Just behind these displays, the customs of burial and beliefs from ancient times are grouped together for visitors to see.

Next to these exhibits on the first floor, in the statues section, there are sculptures belonging to Roman administrative officials, statesmen and athletes from Uşak. In another section on the same floor, stone artifacts found in ancient cities such as Akmonia (known today as Çubuk), Blaundos and Sebaste are exhibited from within borders of Uşak.

The Uşak Museum also possesses a rich collection of coins because our province is located within the borders of the Lydian state where money was first minted and used in antiquity. Therefore, in the intermediate floor of the new museum building, there are only various recreations on how to make and use money, as well as different stages and time periods using coins found in the region.

The second floor of the museum is dedicated to The Treasures of Karun, the most magnificent artifacts from the Lydian-Persia Period which were found near the village of Güre, 25 km west of Uşak on the Izmir Highway.

The artifacts of 363 pieces date back to the 7th century BCE and were illegally excavated by villagers in 1966 from the tomb of a Lydian noble woman, smuggled outside the country and sold to The Metropolitan Museum of Art in New York before their discovery in 1984. After they are found, Turkish journalist Özgen Acar informs the Turkish government which launched a judicial case against The Metropolitan Museum of Art. In 1993, Turkey was able to regain possession over these archeological treasures.