The ruins of the Uçayak Byzantine Church can be found in Kırşehir Province, Turkey. The church is unique because it was built on a remote location without any signs of human habitation and with no evidence that people lived there.

This church was evaluated as executed on an "exceptionally high artistic level." Some pointers to its design are the double or twin-church design, all-brick construction with exception of its foundations, and sloping walls. It has been dated to the late 10th to 11th century and is a double-nave basilica style. 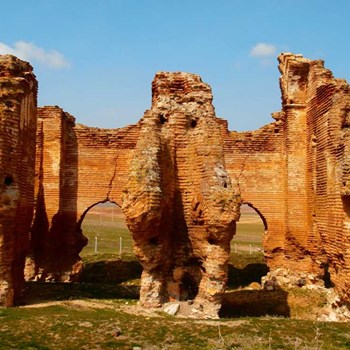 The remnants of the decorations on the facade, sloping walls and architectural style led to its chronology being placed to late 10th or 11th centuries AD. The church was first found in 1842 by W. F. Ainsworth and his travel notes were used by John Winter Crowfoot who visited the ruins in 1900, which were eventually published.

The church design is unusual for Byzantine architecture. The church features two naves adjacent to each other and separated by a wall. These are quadrangular, with each featuring a separate dome. The nave has a common narthex of an oblong shape. The double church design at Üçayak includes two occuli (reliquaries), in which one bank is octagonal and the next circular. Each apse includes these two rectangular bays in front of it.

The double-church design is more unusual because the churches were built simultaneously and do not have a sequential order. Scholars speculate that the church was either in honor of two different saints or martyrs or for two powerful figures; while it doesn't appear to be an emperor and his wife, there are no relics from saints or martyrs found.

Like many other churches built in the eighteenth century, the Üçayak church was adorned by arches that recessed into the walls and formed niches. The same technique had been used for the Church of the Dormition of Mother of God in Nicaea (modern-day Iznik) - one example being Çanlıkilisse from Cappadocia.

When John Winter Crowfoot visited the site in 1900, he discovered faint traces of a fresco on an arched plateau (pendentive). He reported that this fresco was difficult to discern due to its size and location. He also wrote that he found two illegible inscriptions which may have contained information about why the church at such a remote location was built.