Tripolis Ancient City is located about 40 km north of Denizli, east of Buldan and Yenicekent Towns, at the foot of a hill between Buyuk Menderes River and Yenicekent Town. Tripolis was one of the frontier centers in Lydia that ranked as a transportation middleman for Karia, Phrygia, and Tripolis.

The city was rich because of its strategic location, which made it one of the most important cities in the region. It is believed to have been established by citizens from Pergamum. The best extant monuments date from 1st-3rd century AD. Another name for the city was Apollonia according to Plinius. 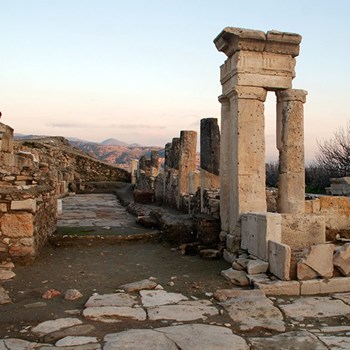 The city is mentioned in Nicaea's list of participants at an A.D 325 council meeting of religious leaders. This illustrates that ancient Tripolis was a center for religion during this period.

Throughout history, Tripolis has endured many wars and earthquakes. The ancient city of Tripolis was heavily destroyed due to many earthquakes and wars in 2nd and 4th centuries. The city lived its most glorious period under the Romans. Excavations were carried out by the Museum Directorate below a stretch of Main Street in 1993, where broader excavation work began at 2007.

Ruins of a Greek-style theater can be found in the city center. It once had a seating capacity of about 10,000. Bath lies 200 meters west of the theater outside the city walls. The outer walls are still standing, but only partly, and there's been some collapse with the interior structures no longer intact. The Council Building is 150 meters south of the bath. Only ground floor remains. To meet the needs of its residents, Tripolis obtained water from a source 25 km away. To do so, they constructed waterways and arches along this route and some of them can be seen today. Necropolis is located on the north and east side of the city wall. It houses a variety of rock tombs, sarcophagi and cemeteries containing podiums.