Tralleis, a small city located in the center of Aydın province and an important historic site, is where Anthemios who designed Haghia Sophia and Aleksandros who had a great role in history in medicine were born and raised. One of the most magnificent Gymnasium-bath complexes in Anatolia lies in Aydın. The building is commonly known as "Uçgözler".

Many of the other buildings in the city include an amphitheater, theater, bath and stadium. 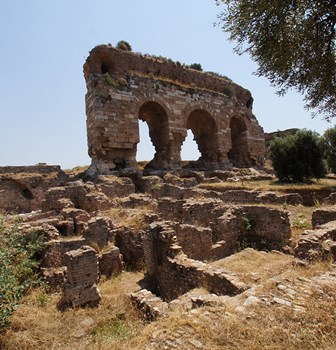 Famous for its leather and red pottery, Tralleis raised two great sculptors named Apollonios and Tauriskos. Two world-famous sculptures of the art of sculpture, the Farnese Bull and the Young Athlete, are also among the marvelous works of Tralleis that came to light.

A tombstone dating back to the 1st-2nd century CE, for a man named Seikilos in Tralleis features an engraved inscription with lyrics and musical notation. This makes his inscription extremely important because it contains one note per syllable which few melodies have survived from antiquity. The music can be reconstructed using this information about its rhythm and tempo distribution.