Toprakkale is a strategically valuable city of the Urartian Kingdom. Toprakkale was founded on a high rocky hill southwest of Zım Zım Mountain in northeast Van Plain. It's 7 km from Tuspa which is located in west of Zım Zım mountain, and 600 meters from Meher Kapi in east of this mountain.

For a long time, the city of Toprakkale has puzzled historians who are unsure about how it came to be founded. It is now known that Rusa, son of Erimena, founded Toprakkale when he satisfied the terms of his father’s will and became king; this idea is supported by works from ancient times referring to Rusa as the hero of Tushpa. 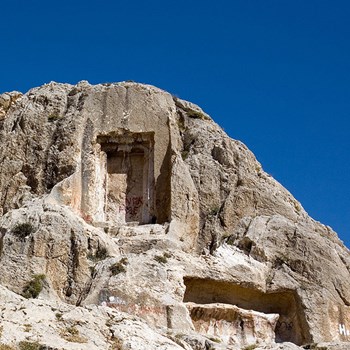 The Toprakkale Citadel was found to be 400 meters x 60 meters. The foundation beds for the fortification walls of the settlement can be clearly seen. There, excavations uncovered a storage room, temple and rock places.

The Haldi Temple in Toprakkale is an example of a square planned Urartian temple. This temple measures 13.80 meters on each side with walls 4-5 meters high and 5.3 meters from the outside.

Meherkapi Inscription or Meher Gate which is about 600 meters to Toprakkale is another very important artifact of Urartians. Meher means “illuminating”. As with other monumental gates, it was named for this attribute because it is believed that God Haldi will emerge from these gates in a beam of light.

Meher Gate, a place of worship built between 820-810 BC by the Urartian King Ispuini and his son Menua, is made up of two frames surrounding it on either side that are 2.60m wide by 4m high. A cuneiform script consisting of 47 lines exists on the inner surface of the door, which was smoothed like glass. To prevent its destruction, the original text renewed and the inscription consists of 94 lines.

In the Urartian Kingdom, polytheism was recognized with gods of conquered regions being also given reverence. In this inscription, in which all the gods of the Urartian Kingdom were given in a certain order, it was stated when and what kind of animals would be sacrificed to the gods. God Haldi comes at the top of the god list.