Tlos is an ancient, ruined Lycian hilltop citadel 4 kilometers northwest of Saklikent Gorge. Tlos is believed to have been one of the most important religious sites and settlements in Lycia, inhabited for at least four thousand years.

The ruins of ancient Tlos sit at the top of a large hill, overlooking the town that has replaced it from centuries ago. Fortresses and tombs dot the land, while with beautiful scenery filling in what's now a forested plateau below. 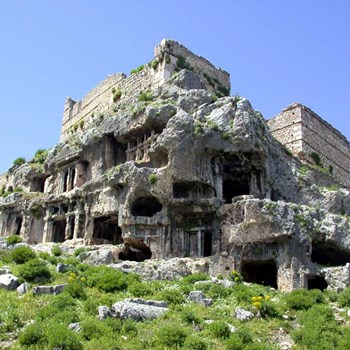 Tlos was the oldest city in Lycia, dating back to before 2000 BC. Tlos is one of six cities that formed a Lycian league, along with Myra, Olympus, Pinara, Patara and Xanthos. A tomb dating from 350-320 BC on the acropolis indicates predates Bellerophon who would have been known as progenitor of the Lycian line during this time period.

The town started minting its own coins in 168 BC. In 43 AD it became part of Roman territory and a metropolis. The many ancient roads that would lead into one point at Tlos indicate how prosperous it must have been once.

A Jewish community with its own magistrates also existed in Tlos. Archaeologists recently uncovered statues of Emperor Hadrian and Empress Faustina the Younger (both at Fethiye Museum) as well as Isis. Christianity eventually replaced Judaism and Paganism and Church's bishop attended the Council of Chalcedon in 415 AD.

One of the most awe-inspiring buildings in Tlos is the Roman amphitheater for 20,000 spectators, which is perched on a hillside and has rows of seats preserved in perfect condition. The amphitheater offers an incredible view of Tlos's Acropolis—you can even see remnants of ancient Roman baths that have been rebuilt later into a Byzantine basilica with seven gates. Despite centuries passing by, the basilica remains well preserved and in particular its ruins are quite fine when observed under warm rays of setting sun.

The ancient city of Tlos; along with the other ancient cities of Lycians (Patara - being the capital city, Xanthos, Pinara, Olympos and Myra, was included in the UNESCO World Heritage Tentative List in 2009.