Tios or Tieion is the ancient city of an Ionian colony on the western Black Sea, in Zonguldak province. The Milesian settlers established Tios in about 700 BC, and it has continued to be occupied through years by Persian, Romans, Genovese traders and Turkish people. 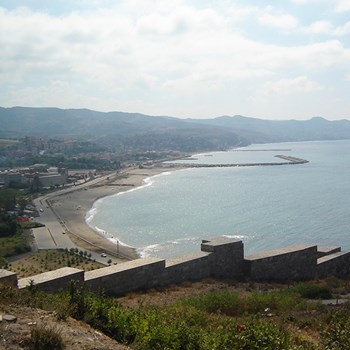 Ancient records and archaeological research provide limited knowledge about the city's archaeological history. Found only in the Roman period, coastal defensive walls, an acquaduct, a theatre, a defensive tower and the port with its breakwaters are now visible remains of what must have once been a bustling city.

The acropolis is located in the northeast of Filyos, on a hill overlooking the village. The original architectural form of the defensive wall that surrounds it will be revealed after research has been completed, but currently only its foundations are visible. One interesting remnant left behind by previous civilizations is a partially destroyed stone building found in the acropolis . A Roman period theatre can be seen near to where you enter Filyos from the main road.

The Amphitheatre was built on a small hillside, using stones from the site itself. Much of its original construction material was later used in other buildings, but one section still stands today. There is another structure which has been attributed to defensive functions, 100 meters west of the theatre and about 200 meters away from the edge of town.

As of now, there are several ruins in the district, including a castle, an open air theater, an underground city, aqueducts and an ancient pier.