Thyatira or Thyateira was a Greek city that is now the modern Turkish city of Akhisar. The name is either Lydian or Ancient Greek, and it lies about 50miles (80km) away from the Aegean Sea.

Thyateira was an ancient Greek city called Pelopia and Semiramis, before it was renamed to Thyateira during the Hellenistic era in 290 BC. King Seleucus I Nicator learned of his wife's labour while at war with Lysimachus and named this city Theuateira (meaning 'daughter') after hearing that his daughter had arrived. 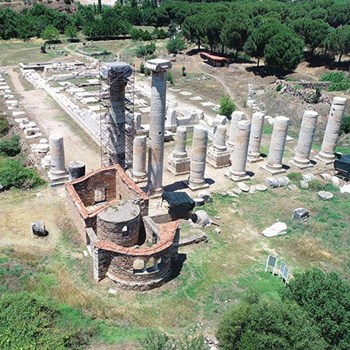 Thyatira once stood on the border of Lydia and Mysia; however it became famous for its dyes around the Roman era. Inscriptions related to a guild of dyers has been found among old ruins of this ancient city.

Thyateira, in early Christian times, was home to a significant Christian church that is mentioned as one of the seven churches from the Book of Revelation. According to Revelation, a woman named Jezebel (who called herself a prophetess) taught and seduced the Christians of Thyateira to commit sexual immorality and to eat food sacrificed to idols.

When the Apostle Paul and Silas were traveling, they might have visited Thyateira. One of their stops during their second (or third) journey was a small unnamed town in that vicinity. In Philippi, they stayed with Lydia from Thyateira who continued to help them after they were jailed and released.