The Three Tombs (Üç Kümbetler)Places to Visit in Erzurum

The Three Tombs (Üç Kümbetler) complex is located in central Erzurum, about 300 meters south of Çifte Minare Medrese. The mausolea are still in use, with only one known as the tomb of Emir Saltuk. There was a cemetery around the mausolea at one time but now it has turned into a park.

None of the 3 buildings have any identification. Emir Saltuk Tomb is dated to the twelfth century based on its architectural style, as well a record in a 1591 Ottoman cadastral survey which attributes it to Izeddin Saltuk, who ruled the Satukid principality between 1132 and 1168. The building has been well preserved, though the roof was replaced in 1956. Emir Saltuk Tomb is an octagonal building decorated with alternating squares of light-colored stone and red ones. On all but four sides the decoration uses blocks in darker colours than that used for the rest of the tomb’s facades; these four square decorations contain lighter stones instead. 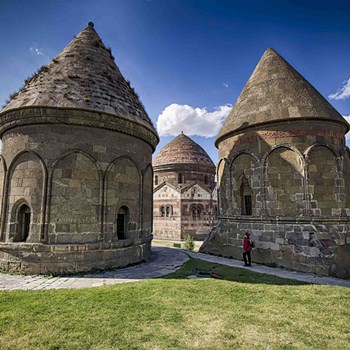 The building has two floors. The upper floor is accessible by opening the door on the northern wall, while the lower level can be reached from inside. The entrance portal is framed with an arch and surmounted by a tympanum decorated with geometric motifs. The lower level, which must have served as a crypt, has a 5.4-meter by 4.26-meter rectangular room topped with an arch of stone blocks and no windows or openings aside from the entrance. No sarcophagus is currently in this area.

The second tomb, known as Anonymous I, is found southeast of Emir Saltuk’s mausoleum. It is a dodecahedron-shaped building on a high square foundation topped by a truncated pyramid and connected to the cylindrical drum of the same color just below its conical roof. A band with guilloche ornament in red stone runs around the circumference of the drum just under the roof. The building has two floors serving as a prayer hall and a crypt. But since there is no inscription on the building, it's impossible to date it precisely: Estimates in dating vary according to different scholars from the thirteenth century to early fourteenth centuries.

The third tomb is structurally comparable to the earlier examples, but it lacks a distinctive high foundation on the front.