The Zagan Pasha (Zagnos Pasa) MosquePlaces to Visit in Balikesir

The Zagan Pasha (Zagnos Pasa) Mosque in Balikesir is a historic mosque known as the place where Mustafa Kemal Ataturk (founder of Turkish Republic) delivered his famous "Balikesir Khutbah" back in 1923. In this speech, he begins by saying “God is one, his glory is great. May God's peace, reference and goodness be upon you” and proceeded to give messages that emphasize the basic principles of the new state. These include: revolutions and the new republic that was going to be founded soon: Turkish Republic. 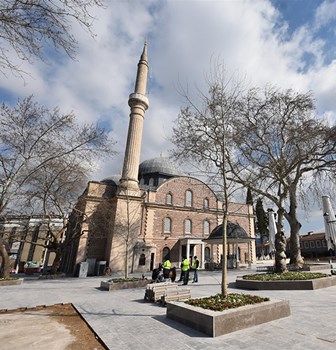 The mosque was built in 1461 by Zagan Pasha, an Ottoman military commander and Grand Vizier of Albanian origin. It is located in the city center, made up of a tomb and a hammam. The mosque buildings had been destroyed during Admiralty (1897) but rebuilt by Governor Ömer Ali Bey in 1908.

The mosque, the biggest in Balıkesir, has a square plan and is constructed from ashlar masonry. There is one main dome surrounded by four smaller side ones. Entrance to the mosque is through the doorways on its north, west and east sides. The three sides of the mosque which surround the porch are decorated with an inclined lead-coated timber roof supported by two square columns. There is no narthex. The minaret is situated on the northwest corner of the building. It was made as a donation by Hafız Efendi, a notable family in Balıkesir. In the courtyard, two shadirvans and a tomb are situated. Outside of the courtyard's northwest corner there is another shadirvan that has a pentagon plan. A sundial is attached to an object sitting on top of short thick column at the south end of the courtyard.