The BosporusPlaces to Visit in Istanbul

The Bosporus or Bosphorus, also known as the Istanbul Strait, separates Turkey's European and Asian sides. It was named after a Greek legend about an affair with a beautiful woman named Io. When Hera found herself betrayed by her husband Zeus and turned Io into a cow, she created the horsefly to sting her on the rump and cover over her betrayal.

Gesturing wildly from shore across this legendary body of water brooks were called bous for their shape - in reference to Io who lived out one side of her life as and then another before finding peace crossing back over that same strait once more. 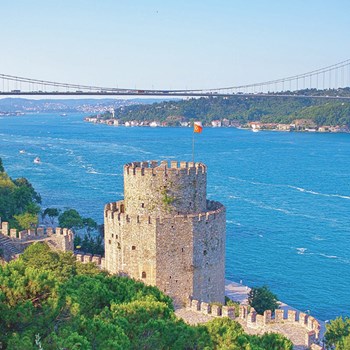 The Bosporus strait is the world’s narrowest used for international navigation. It connects the Black Sea with the Sea of Marmara, which shares a connection to the Dardanelles and Aegean Seas that connect in turn by way of Greece to the Mediterranean. It is about 30 km long, but it changes width constantly moving between 700 and 3700 meters. Its depth rises from 36 meters to 124 meters depending on location throughout.

Istanbul, the busiest city in Turkey with over 16 million metropolitan inhabitants, sits on Istanbul Strait's shores. Two bridges cross the Bosporus. One is called the Bosphorus Bridge and the other is called Fatih Sultan Mehmet (Bosphorus II).