Telmessos Ancient City and Tomb of AmyntasPlaces to Visit in Mugla

Telmessos was a Lycian Union city in antiquity, and served as the largest city in Lycia. The name of the modern town on its site is Fethiye; while 'Telebehi' was its original name in the Lycian language.

Telmessos has a well-protected harbor that is enclosed by an island when compared to Fethiye Bay. Inscriptions reveal that Telmessos has been continuously inhabited from its inception. 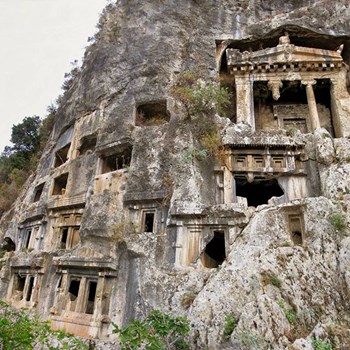 The ruins of the Telmessos, near Fethiye are among the most impressive historic attractions. It includes rock hewn tombs and a 6000 seat theatre that was built in early Roman period as well as repaired during 2nd century BC. Other than this, there is also museum situated at the site.

The Lycian tombs are one of the symbols of Telmessos Ancient City. The most magnificent and famous is from the ancient times, built with two pillars belonging to King Amyntas (son of Hermagios) dating back to 4th century BC. The name of king Amyntas is engraved on left column in Lycian language and as you get closer it's greatness can be appreciated.

To reach the tomb, you will see a staircase leading up the mountain. The staircase has many stairs so it might wear you out and make you feel exhausted after climbing it but its worth all the effort because when you finally get there, then Amintas huge tomb will be waiting for you. It is one of Turkey’s most spectacular tombs.