Tekkeköy Caves Archaeology Valley is located in Tekkeköy, Samsun, and has a settlement that dates back to the Stone Age.

A large number of prehistoric caves, shelters and flat settlements were discovered in the valley which was first explored in 1941 by a delegation headed by İsmail Kılıç Kökten. Among the finds dating back to the Old Stone Age, there are arrows and spearheads, axes, cutting and scraping tools obtained through a process called stone chipping. 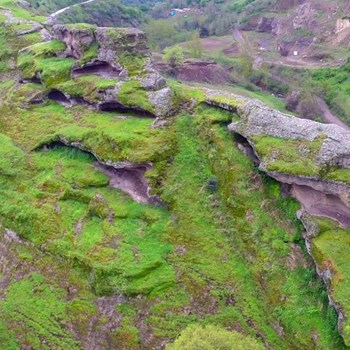 Besides the tools of the Old Stone Age, pottery and jewelry from the Bronze Age were also found. The form and techniques are what would be expected in Central Anatolia, but some of the bone tools obtained show a higher level technique than those found in other areas.

Delikli Kaya, the location where Çınarcık and Fındıcak Valleys meet, a Phrygian castle was discovered, which is thought to have been used for inter-trade purposes as well. Additionally, traces of an Hittite road were found in the valley, suggesting that it may have been a ceremonial road for high-ranking Hittite administrators.

The valley was the site of many important findings from the Middle Stone Age, Early Bronze Age and Hittites. These finds are now housed in the Samsun Archeology and Ethnography Museum.

The Old Stone Age layer, discovered in the caves of the valley and dated around 60,000 BC-15,000 BC, is the oldest settlement found in the Black Sea Region. These first cave dwellers were communities that had not yet developed a sense of community and weren’t producers.