Tatlarin Underground City, which is one of the most significant underground cities in the Cappadocia Region, was only discovered in 1975 since its original entrance had collapsed. Thanks to a restoration project that has been carried out, the city has emerged for public visits starting 1991.

Tatlarin underground city is located in the Acigol district of the Nevsehir province and currently only two floors are open for visitors, although more will be opened soon. Although there are many churches nearby, most have disappeared due to natural erosions and collapsions. 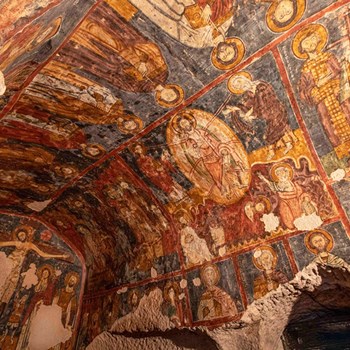 One of the most interesting features of Tatlarin Underground City is the existence of toilets. There are just few toilets available in Cappadocia underground cities. The only other spot with this kind of toilet is a single site close to Guzelyurt. It is remarkable for the size of the chambers and their high food stocks. The city is largely thought to have served as a Roman military garrison. Three skeletons found in the city were theorized to belong to Romans.

The original entrance has been destroyed and the halls can be reached with a passage of 15 meters. The passageway to the entrance opens into a large hall. This hall is sealed by a sliding stone which can only be opened from inside, and serves as instrument of defense against invaders or animals.

Three skeletons were found on the right side of a hall. Based on their placement in this area, it can be inferred that they were buried during the Roman period and used as a kitchen during Byzantine times - because their burial spots seem to correspond with those of in-ground Romans from centuries ago. However, there is evidence of digging underneath these graves even deeper than the width of an average person's shoulders so that food supplies could be stored here.

One large hall is connected to a second large area with an intricate zig-zag-shaped corridor. There is a trap and stone sliding door against intruders; this section also has five food storage areas carved into the floor supported by strong columns. A ventilation well in the ceiling provides access to parts of the city above.

Just to the right of the entrance to the underground city, there is a church. Although one section of two naves has collapsed, many murals can still be seen. Three colors are used in these images: purple, red and mustard; this dark background highlights their figures which include Mary with Jesus as well as Archangels Michael and Gabriel, Anastasis (Christ’s resurrection), Entry into Jerusalem (from Mark 11:1-11), the Crucifixion from John 19:14-18, and the Transfiguration from Matthew 17:2-9. There are also portraits of nine other saints to view. The secular pictures show Constantine the Great with his mother Helena followed by some donors who funded construction of the church.