Taskinpasa Madrasa and Complex is located by the side of Urgup-Soganli road in the village of Damsa, 20 km south of Urgup. The Karamanid Dynasty established a madrasah here, which measures 22.6 meters by 23.8 meters. The date of construction is not known for certain because there are no inscriptions on the building. The tomb dates 1342-43, while the sarcophagi date to 1350 and 1355. These dating show that it was built in the middle of the century.The mosque, summer masjid, cupola and open tomb are located within a courtyard wall.

Its portal, the mihrab in its mosque, and its door and windows were made from stone cut into blocks whereas rough stones were used to build the rest of the walls. Although it's upper storey has completely collapsed, it is understood from a set of stairs that lead to the left of entrance that at least two storeys existed. 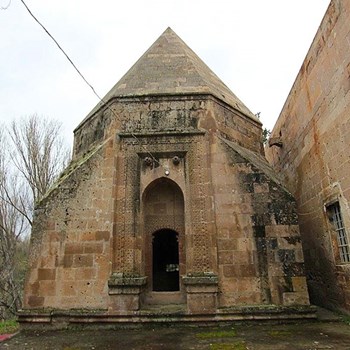 The impressive stonework on the portal on the western side of the mosque is in classical Seljuk style. The nameplate, which should be above the entrance, has been lost. To the right of it is a mescid with a square-head arch; its embellishment includes both geometrical and floral motifs that are seen especially well in its mihrab. In addition to palm leaves at upper levels, this part also has lines of leafy plant life for decoration as well as scrolling work along decorative borders.

The courtyard sits in the middle of an open space with a number storage rooms that are unconnected to it. The builder of the cupola to the east of the mosque is unknown. However, it is suggested that Taşkın Pasha built the cupola which was also a two-story structure cut from stone and had an octagonal pulley inside with a pyramidal cone on the exterior. Unique to this building are four corners turned into an octagon and large chambers on all sides.

Situated northeast of the mosque, Hızır Bey Tomb is said to be built between 1350 and 1355. The hexagonal open tombs on the outside are made from connecting six pillars with pointed arches. One arch on the south façade appears different from others. It features zencerek motif columnar capitals, stalactite pendentives and openwork hovel motifs. From the inside, the building has three rows with muqarnas stones and a dome. A pyramid on top had been turned into a dodecagon and is covered by a pyramidal cone from the outside. Inside there are three marble coffins and geometric star crossings on two of its rows