The 800-year old Taşkale warehouse, hand carved from limestone and located 45 kilometers away from Karaman, Turkey is the perfect day trip to see something not often seen in other parts of the world.

The Taşkale granaries are thought to be one of the rare and interesting architectural works in the world that can't be found anywhere else. The limestone formations, which were created by carving a large rock out of limestone, still keep their original features. 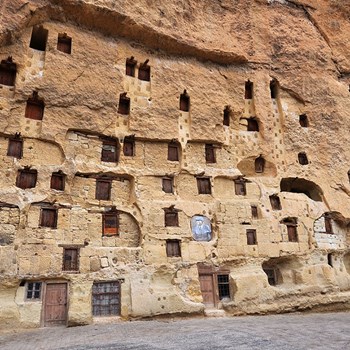 The warehouses have depths of up to 40 meters and heights that may differ. The newest grain barn was completed 150 years ago, entirely made with man-made materials. These grain warehouses have high walls, carved into them. Grain barns are old and standing safe inside. Rocks are carved to make steps and signs.

A fifty to sixty centimeter square door made from an Juniper tree is used to close off every cave. Pickets of wheat and barley are removed in sacks with ropes attached and stored on these caves. The limestone feature destroys a lot of moisture for each barn.

The chambers carved into natural rock have a product storage capacity of 5 to 60 tons. These have been opened in order to store the products separately. Warehouses, which are made of tuff blocks and provide air circulation in all seasons, can be reached by pressing the "handle" spots on the surface called "bounce."

Dating back to the Byzantine Empire of 6th and 7th centuries, Manazan Cave village features a vertical rock face carved to create tiny living quarters. Naturally protected from invaders and the weather, these rooms have survived through centuries of war in Central Anatolia.

Although seemingly impractical, today's beautifully intact ruins stretch up five stories and across 3km of cliffs - with the intricate series of caves and tunnels housing churches/storehouses/family homes and even cemeteries all high above ground on the cliff face.

The town is no longer inhabited, but locals from Taskale still use the mild caves as a storage place for grains. The region is developing the area for more tourism revenue.