TarsusPlaces to Visit in Mersin

Tarsus was a city in ancient Cilicia. It is said to be one of the oldest continuously-inhabited urban centers, predating other cities such as Rome. The site of Tarsus located by Berdan river deemed it an important trade center throughout its long history.

There have been many civilizations rise and fall in Tarsus. The Hittites flourished here c. 1700-1200 BCE, then it was sacked by the Sea People some time after 1200 BCE and resumed its former status as a vital trade center under the Assyrians between c. 700-612 BCE who were followed by Alexander the Great (333-323) until it fell to Rome in 103 CE. 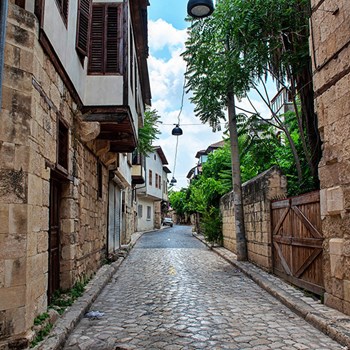 According to Greek philosopher Plutarch, Cleopatra VII (69-30 BCE) met Mark Antony (83-30 BCE) aboard her ship outside the city’s port gate. Alexander the Great (356-323 BCE) spent time in Tarsus when he fell ill after swimming in Cydnus river. Tarsus is best known as the birthplace of Saint Paul (also known as Saul of Tarsus).

After 64 BCE, it was the capital of the district of Cilicia Campestris and remained so when renamed Cilicia Prima and when subsequently taken by Byzantine control. It continued as an important city for commerce after being taken by Ottoman Empire.

The Church Mosque (Kilise Cami) in the city center was built as a church about 300 AD, perhaps dedicated to St Paul. After 1,000 years as a church, it was converted into a mosque in 1415 when the city was conquered from the Byzantines by Turkish emir Ramazanoğlu.

The Roman-era Cleopatra's Gate is a remnant of the ancient city's defensive walls.

St. Paul’s Well is an old stone well and the main reason many travelers stop in Tarsus. The few streets of historic houses near St. Paul’s Well are interesting to walk through, a glimpse into what the town looked like for much of its history during the last millennium.