The Susuz Inn (Susuz Han)Places to Visit in Burdur

The Susuz Inn (Susuz Han) is in the village of Susuz, close to Bucak town on Highway Antalya-Burdur. It was constructed around 1246 AD during Gıyâseddin Keyhusrev's reign and it belongs to the Seljuk era.

Susuz Han is a rectangular building with an east-west orientation and dimension close to square. The facade features geometric decorations that combine plant, figural and geometric patterns. 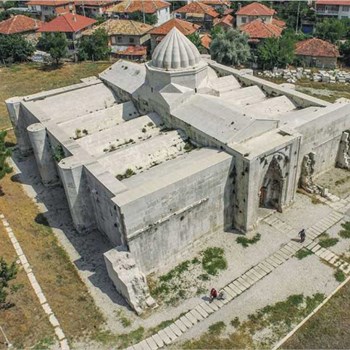 Opinions about the open courtyard part of the caravanserai range from it never being built to having been destroyed after construction.On the east side of the building, to the right of the portal are remnants that were part of some arched spaces built adjacent to a closed section. The walls supporting this closed section were buttressed from outside on each facade and had crenellated windows.

The doorway in the eastern façade of the caravanserai is framed by a pointed arch, with geometric patterns on it. There is a geometric ornament consisting of twelve-armed star inserts on the wide border, and a geometric interlaced ornament on the next thinner border. The pointed arch has a vegetal border surrounding its door entrance, and as well the corner corners next to the muqarnas cassock consist of 7 rows of motifs. Kavsara sits on stalactite stirrups at both sides. The decorations on the columns are a geometric design and have acanthus-leaf capitals. The doors are arched in a flat shape.

The most striking feature of the portal is the figured decorations. Two dragons come face to face in an opening with muqarnas hoods on both sides of a doorway and human heads in the middle. The upper two corners of the arches contain a pair of angel figures who appear to be rather devastated. Small lion statues line the sides of the door.

The caravanserai is divided into five naves with sixteen square-section piers and pointed arches. In the middle nave, a dome fronts with pendentive transition and covered by vaulted ceilings. The caravanserai measures by 28 meters x 30 meters.