The Surp Krikor Lusavoriç Armenian Church is located in the city of Kayseri and was constructed in 1191. It's original building lasted until 1653, appearing to be the same way it is today--the church that has survived through centuries of repairs and rebuilding. 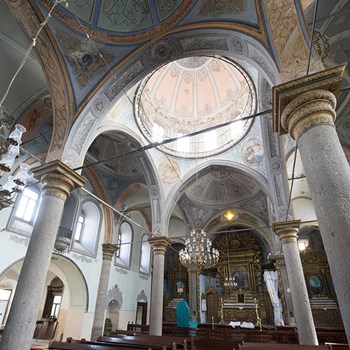 Ruined or destroyed in the first half of the 19th century, this church was rebuilt in 1859. Kevork Agha Mindigyan, a well-regarded tradesman and an important supporter of the construction business, met the needs of the rebuilding project fairly with his friends who were bacon traders, craftsmen and artisans who completed the effort with great enthusiasm within a short amount of time before he died in 1875. The interior plaster finishing for this historic building was applied in 1903.

After World War I, some repairs were made to the Church. In 1919, a philanthropist rang the church bell in exchange for a donation of 100 gold causing sadness among congregants on Saturday evening before Vartavar celebration.

The church was renovated in 1996 following a donation by Zadig and Penyamin Toker from Kayseri. In 2009, it underwent its final renovation with the help of Deputy Patriarch Archbishop Aram Ateşyan and was reopened for public worship. Surp Krikor Lusavoriç church is more than just the sole Armenian church in Central Anatolia, it also serves as a spiritual center for an entire community.