The Mosque of Sungur Bey is located in the southwest region of the Niğde Citadel. It was constructed in 1335 and has a rectangular design with two minarets. The mosque's entrance door features both kündekari and hand-carved artwork using mother-of-pearl. This level of detail can be seen for the first time on Sungur Bey Mosque's entryway as well as its fine, ivory carvings that adorn its minbar (a pulpit from which sermons are delivered). The mosque also showcases various features typically found on Anatolian Seljukian art mixed with Gothic artistry.

Little is known about the architect of this mosque but, during its construction, two craftsman worked on ornamental pieces. The pulpit and door wings at the northern side of the building were created by Hoca Ebubekir while those of the Eastern side were made by someone named Hacı Muhammed. There is an inscription dated 1469-70 AD on the main entrance opening of the eastern crown gate. This probably signified repairing to a mosque around that time. 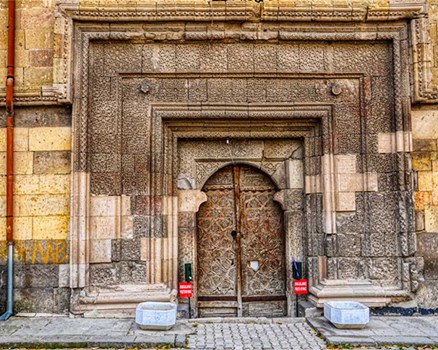 The mosque is laid out on sloping land with long sides in an east-west direction and measures 28.45x37.10 meters from the outside. The building includes a portal to the harim (east) and north façades, as well as a tomb situated before the east façade where finely cut trachyte stone of yellowish color was used in construction.

A very clean and careful workmanship is seen in the construction of this building, with a crown door on the east and north facades. Additionally, there is a "gentleman's door" in the east corner of the north façade that can be accessed via a ladder.

The Rib Vault is the most notable feature of Eyvan Gothic Architecture. It was only used in the iwan and on some mihrabiyes, while other were left open for light to fill the space inside. The decoration consisted primarily of geometric and figural motifs.

Eyvan Gothic Architecture has a series of unique features that makes it stand out from others.There are 37 figures on the north panel and 42 figures on the south panel. These; It consists of bird, elephant, kid, horse, panther, antelope, dragon, rat, bull, rabbit, monkey, dog, lion, sheep, duck and fish figures. We think that these were made to adorn the crown door as a memento of the Turkish Calendar with Twelve Animals.

The North Crown Gate is adorned with some geometric decorations, and has plant and figurative carvings. In the mosque, all four of the windows on the lower half of the west wall are preserved from medieval times. Likewise, three windows on each side upper part are also in excellent condition. The pulpit at Out Mosque is embellished with wooden decorations even to this day.