Sulu CavePlaces to Visit in Kirikkale

Sulu Cave is located in Kırıkkale, Keskin district, Arzu Bayırı locality. It is a horizontally developed, semi-natural-semi-artificial, sinkhole type fossil cave. The natural part of Sulu Cave, of which a large part was opened as a mining quarry, belongs to the Pliocene relief system consisting of three interconnected floors. 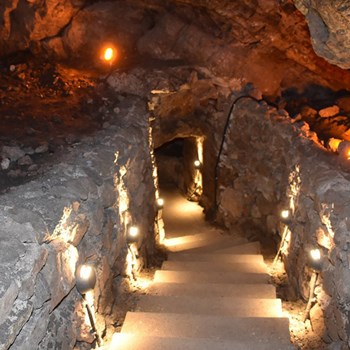 Its total length is 285 meters. Lead operation was carried out in the artificial galleries consisting of three floors. The narrow passages connecting both natural and artificial sections are covered with stone walls built in the Early Christian Period.

Hydrologically located in the vadose zone, Sulu Cave is completely dry except for the water dripping from the ceiling during rainy periods. In order to collect these waters, pools with a depth of 2 meters were built in ancient times. The cave has a dry and hot weather. It has been made ready for visits by the Kırıkkale Governor's Office, the Special Provincial Administration, after the construction and landscaping.