Sultanhanı Caravanserai, or the Sultanhani Inn, is an inn on the Kayseri-Sivas highway in Turkey. Built between 1232-1236 during the reign of Seljuk Sultan Alaeddin Keykubat I, it offers traders refuge from hunger and thirst.

The caravanserai covers an area of 3,900 square meters, making it the second-largest medieval caravanserai in Turkey after the other Sultan Han near Aksaray. Like other Seljuk caravanserais, it served as a stop for travelers and merchants along the major trade routes of the region, providing lodging and other basic services. 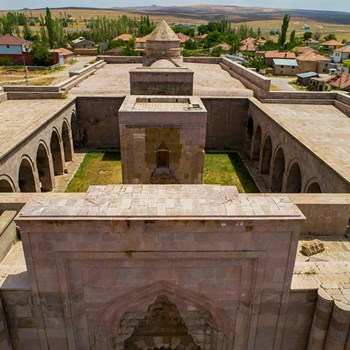 Sultanhanı Caravanserai is one of the typical Seljuk caravanserais. Although they were designed according to the same plan, they also have different appearances with additional structures or elements. One distinctive feature of Sultanhanı is its Masjid in the middle, which isn't present in many other caravanserais.

The exterior of the building features a fortified appearance and is marked by a monumental entrance with rich stone-carved decoration, including a vaulted canopy of muqarnas. This entrance leads to a large interior courtyard surrounded by arcades, at the center of which is a small square chamber elevated on four pillars--a mosque. The mosque has a staircase for its entrance to the north. Motifs on the facade are of geometric rosettes, two-knotted borders and dragon depictions with their mouths facing each other.

Opposite the entrance, a 50 meters to the other side of the courtyard is another portal which leads to "winter hall". The structure contains notable examples of Seljuk stone-carved animal motifs including angels with lion heads and dragon motifs.