Sultanhani, a Seljuk caravanserai located in Sultanhani town of Aksaray Province, is a large 13th-century monumental building. It's just over 40 kilometers from the city center on the road to Konya. 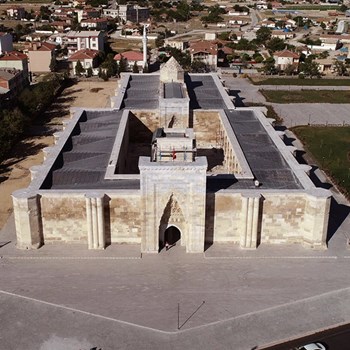 The Caravanserai is entered at the portal gate, 13-meter high, sculpted with elaborate muqarnas (stalactites), rosettes and interlacing. The pointed arch framing the gate is decorated with muqarnas corbels and a geometrically patterned plaiting. The main gate leads into an open courtyard measuring 44 by 58 meters which was used in summertime.

A similarly-decorated archway on the far side of the open courtyard, with a muqarnas niche and pointed arch windows, leads to a covered courtyard (iwan), which was for winter use. The central aisle of the covered hall has barrel-vaulted ceiling with transverse ribs.

A square stone köşk mescidi (mosque-kiosk), the oldest example in Turkey, stands in the middle of an open courtyard. The upper floor is supported by four carved barrel-vaulted arches with a mehrab decorated with rich decorations and lit by two windows behind it on either side.[5] Stables were located among arches that wrap around an inner courtyard, and had spaces for living quarters above them. There are also rooms with arches and halls, two baths, and warehouses in the middle courtyard.