Suleymaniye MosquePlaces to Visit in Istanbul

The Süleymaniye Mosque was commissioned by Sultan Süleyman, designed by imperial architect Mimar Sinan, and completed between 1550 and 1557.

The Süleymaniye Mosque was damaged in two disasters: the 1660 Great Fire and the 1766 earthquake. Sultan Mehmed IV commissioned its restoration but part of its ceiling collapsed in a subsequent disaster, damaging Sinan’s original decoration. During World War I the courtyard was used as a weapons depot, and when some of the ammunition ignited, the mosque suffered another fire. Not until 1956 was it fully restored again. 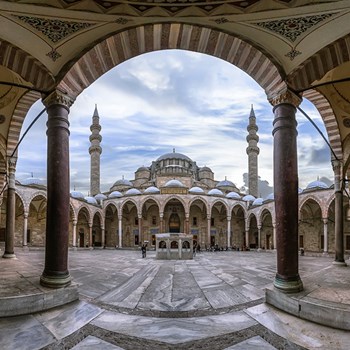 The mosque is a single space measuring 59m by 58 m, with a dome flanked on either side by semi-domes. On the north and south arches are tympana decorated windows supported by enormous monoliths of porphyry stone. Sinan included buttresses in the building's design, connecting them to the walls. The interior half of these buttresses was incorporated into the inside wall while the exterior half projected outside and he then disguised their presence by building two-story colonnaded galleries inside and out around them.

The interior decoration is restrained with stained-glass windows only used on the qibla wall. Iznik tile revetments are only found around the mihrab. This repeating rectangular tiles have a stenciled floral pattern on a plain white background. The flowers are mainly blue, with turquoise, red and black but green isn't used.On either side of the mihrab are large tiles bearing calligraphic texts from surah Al-Fatiha in the Quran. The mihrab and mimbar, made with marble and white mother-of-pearl, are simple designs. Woodwork is restrained as well, with only subtle designs adorning ivory and mother of pearl.

Just like the other imperial mosques in Istanbul, Süleymaniye Mosque was designed as a kulliye, or complex with adjacent structures to service both religious and cultural needs. The original complex consisted of the mosque itself, hospital (darussifa), primary school, public baths (hamam), caravanserai, four Qur'an schools (medrese), specialized school for learning of hadith, medical college, and public kitchen which served food to poor.A few of these structures are still in operation, and the former imaret is now a famed restaurant. The former hospital is now a printing factory owned by the Turkish Army.