Suleymaniye MosquePlaces to Visit in Tunceli

The Suleymaniye Mosque is located in Çemişgezek District of Tunceli province. There is no inscription giving the construction date of the mosque, and there is no information about the building in historical sources. Evaluating this monument from its plan, material and technical features reveals that it has a Regional architecture style which coincided with Seljuk designs but continued with Artukid styles after they took power. 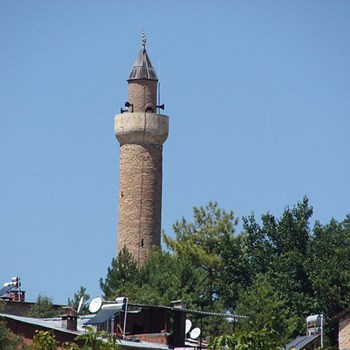 We know the construction increased in Çemişgezek, which was given to Pir Hüseyin by Sultan Selim after the Battle of Çaldıran. For this reason, it can be said that Suleymaniye Mosque was built during the XV or XVI centuries.

The architectural features of the mosque reflect Seljuk style, which is the main building among historical monuments in this district. Due to the land's slope, it can be accessed by descending a few steps. The mosque was repaired as if an 18th century replica and lost its originality.

Although the date of construction cannot be finalized, the door of the mosque has been preserved until today and retains its original form. The tiled minaret, which was made from a single brick and survived from its original structure with only one balcony, is now largely plastered over and can no longer retain this feature. The minaret could not be used as evidence for when the mosque was constructed - only that its construction was preceded by the minaret's construction.