Somuncu Baba Tomb and ComplexPlaces to Visit in Malatya

Seyyid Hamid-i Veli, the 12th-century Sufi who retreated to Darende to lead a life of contemplation, is the namesake of Somuncu Baba Tomb and Complex. The mosque's single detached minaret can be seen between soaring rock walls and a sacred fish pond. 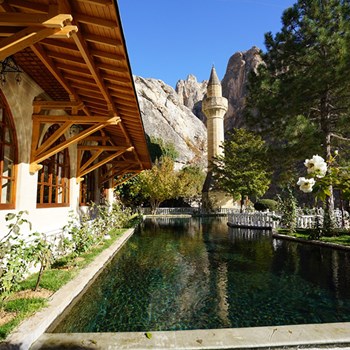 Sheikh Hamid-i Veli, who lived between 1331-1412, visited many cities and his final stop was Darende. Somuncu Baba, who guided the people around him with his çilehane in Tohma Canyon and the lodge he built on the banks of the Tohma river, passed away in 1412 in Darende. He was buried in his lodge after the funeral prayer led by Hacı Bayram Veli who is one of is followers becoming a very important teacher in the later years.

The tomb of Somuncu Baba appears to have been initially established as a zawiya and madrasah, then later became the mosque that is seen today. the minaret of the mosque has been added in 1685.