Sokullu Mehmed Pasha Mosque and ComplexPlaces to Visit in Kirklareli

The Sokullu Mehmed Pasha Mosque and Complex is a 16th-century Ottoman mosque in the town of Lüleburgaz, located in Kirklareli province.

The mosque is the most important building in this complex and located on the Istanbul-Edirne road. The foundation charter mentions the existence of a tannery, school, and bathhouse here, but only the mosque and madrasa are present today. 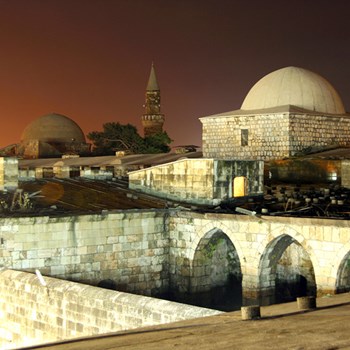 The original design has become an example to other mosques built in later years. A large dome in the center separates religious and daily living spaces, while merchants from the bazaar have been meeting there every day for morning prayer before opening their shops.

Structurally, the mosque is a square plan with weight towers larger than typically seen. The original decoration is gone and most of the calligraphy has been lost to time, but its dome and mimbar still create an impressive interior space.

The minaret's architectural style resembles classical period but the construction was destroyed during the Bulgarian occupation of 1910-12 and rebuilt in 1934. The Department of Pious Foundations restored the mosque and madrasa buildings in 1952-68, making it one of Lüleburgaz's most important mosques. It is always open to public use during daytime hours.

The Sokullu Mehmed Pasha Complex is of significant significance in many respects, due to its close proximity to major roads and historical sites, as well as the prominent architect that designed it. The complex was named after an important vizier and contains much architectural variety; all these elements make it worthy of mention in Ottoman history. Currently, the building functions as both an attraction for tourists and a meeting place for nearby residents.