Sogmatar Ancient City found near the ancient city of Harran offers a look into a different and inclusive side of the ancient world. It is believed that in the region, Moses escaped from Pharaoh and engaged in farming here in this ancient city. One of the well holes was opened by Moses' miraculous staff. The story is that Moses fled from Pharaoh's army and hid in the desert. It is believed that he was shepherding sheep and goats when the water from a well miraculously began to flow on its own with no one near it. The water ceased as soon as it had come, but Moses struck the ground three times with his staff before turning away. 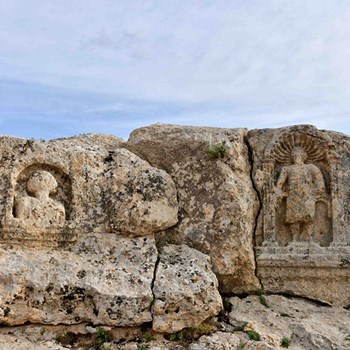 In the center of this town is an ancient hill with remnants from a civilization that dates back to the 2nd century. During that time, Soğmatar was a pagan religious center where people paid homage to 7 temples thought to represent the Sun, Moon, Saturn, Jupiter, Mars, Venus and Mercury. The outdoor sacntuary, Sacred Hill, was the temple for Mare-lahe (Lord of the Gods), and it is the sacred destination for settlers from all over Sogmatar settlement order.

120 tombs were discovered and excavation started in 2012. Family tombs were found with tomb areas for children, which included horse and cart-like cars made of clay, as well as a temple to the moon god Sin and a nearby hill sacred to Harran Saabiss.