It is believed that Smyrna was established in the 3rd millennium B.C. at present-day Bayraklı, by Amazons, legendary female warriors . Smyrna had fallen under the influence of the Hittite Empire by 1500 B.C.

The city of Smyrna was one of the most important cities in the lonian Federation during the first millennium B.C. It is believed that Homer, the Poet, resided here and used Smyrna as his inspiration for writing The Odyssey. The Lydian conquest loosened Smyrna’s hold on power around 600 B.C., and allowed new rulers to emerge and tighten their grip on power again throughout the Lydian period (560-380 BC). 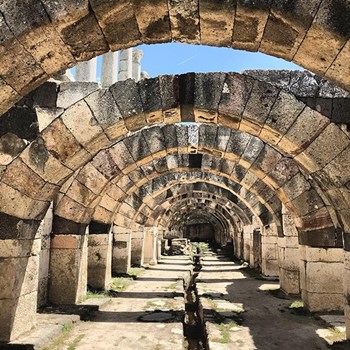 In the fourth century BC, during the reign of Alexander the Great, a new city was built on slopes of Mt. Pagos. Legend has it that Alexander the Great had a dream about goddess Nemesis and (according to legend) Nemesis ordered him to re-build City of Smyrna.

In 332 BC, Alexander died and Smyrna was ruled by the Roman and Byzantine Empire. In 1413, it was captured by the Turks but later ruled by Emir Çaka Bey, Aydınoğlu Umur Bey and Seljuks until Mehmet II of Ottomans won in 1459.

When you visit the historic site of Smyrna, your first stop is the Agora. One of the largest agoras with a size of 129 meters by 83 meters, this ancient building can be recognized as one of many that are from antiquity in the region. The wider history has several other structures like stadiums and theaters but today many are under slums due to housing. The ancient theater with a capacity of 20 thousand people seems to be among the largest in the world. The stadium has also been discovered but since it is not yet expropriated, excavation cannot currently be done for now. The artifacts taken from the Agora are now exhibited in Izmir Archeology Museum and Art Museum.

Smyrna was one of the cities where John the Apostle sent a letter in Revelation. The book Acts 19:10 also suggests that this church’s foundation occurred during Paulus's third missionary journey.