Sinop Fortress Prison (Turkish: Sinop Kale Cezaevi) was a state prison situated in the inner fortress of centuries-old fortification on the northeastern part of Cape Sinop. The prison was closed down in 1997 and inmates were transferred to modern prison which had been recently built in Sinop. The building was established in 1887. 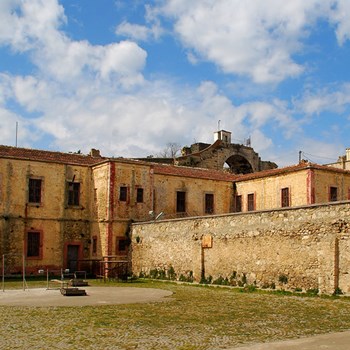 Because of its position within a fortress, the prison was considered to be high-security with no possibility of escape. It is important to note that while in jail, it was hard even to light a match due to how close the prison is located next to the sea.

The Sinop Fortress Prison is one of the most famous Turkish prisons and was mentioned in many stories and poems by notable writers. Sabahattin Ali's poem Aldırma Gönül, written 1933 in the prison and featuring the prison life, was composed in 1977 by Kerem Güney. It became very popular when it was covered by Edip Akbayram who made a number of versions. The Turkish movie Pardon (2004) and the TV mini series Firar (Prison Break) (1993) and Köpek (The Dog) (2005) were filmed in the historical prison. Parmaklıklar Ardında, a 2007 TV mini series that originated from the 1997-2007 RTL Television series Hinter Gittern – Der Frauenknast, was filmed at the Sinop Fortress Prison.

The prison facilities were handed over to the Culture and Tourism Ministry in 1999. The fortress prison now welcomes visitors for sightseeing purposes. Interest has increased recently due to its inclusion in more cultural productions as well as because of a rise in public recollection of recent crimes. It hosts hundreds of thousands tourists every year.