Sinop CastlePlaces to Visit in Sinop

Sinop's advantageous geographical position has led to it becoming a major Black Sea port during history. The Sinop Castle is believed to have been formed by Miletus immigrants circa 800 BC, and then improved upon by Genoeses inhabitants. Its 2km-long walls are 8 meters wide with heights of 25 meters and consist of eight bastions in total. 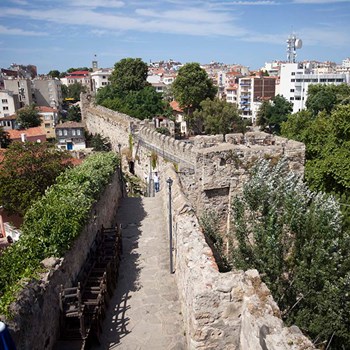 During the reign of Candaroğulları Sultanate, in 1345, Adil Bey granted permission to Venetians and Genoeses towards establishment of colonies in Sinop. Dated 1351, Laurentiana Map shows a Genoese flag over Sinop city which hints at evidence for a Genoese colony existing there during that time. After Adil Bey died, the use of Sinop by Genoeses continued for trade purposes.

Sinop served as an important port on the main trade routes during the 13th and 14th centuries. Merchants coming from Syria, Egypt, and elsewhere would stop off in Sinop before continuing farther north. After 1261, Genoeses and Venetians began to be involved in trading in the region around Black Sea. As a result of this perspective change, trading with Europe increased dramatically and caused Sinop to become more prized as a port town; it became similar to other northern seaport cities.

Genoese sailors brought fabrics, soap, glass and gemstones to Sinop. In turn they bought copper from the city. Goods that moved through Sinop were grain, alum, wax and leather. There was a Genoese harbor in the north area named "Kayzer Koltogu" situated behind the port town with a high tower behind it where they loaded out goods unloaded by those who mined near Sinop. To defend this much trade, they improved Sinop Fortress a lot and made it quite strong.