Sille NeighborhoodPlaces to Visit in Konya

The oldest residential district of Sille is not in the center but in a mound of spreading ruins from 8th to 7th-century B.C., where evidently Phrygian population lived at that time, according to stone findings from old architecture. The city was probably a wayside station along the Roman King Road coming from Ephesus and heading for Konya (close by) on his way to Asia Minor: Saint Paul visited here when he visited this district on his trip through Anatolia.

In the 4th century A.D., Ephesus had lost its importance as a capital, and Istanbul had gained in importance. Konya, which lay next to Istanbul on the way to Jerusalem, held its own ground and became "a wayside station for pilgrims travelling from Jerusalem". 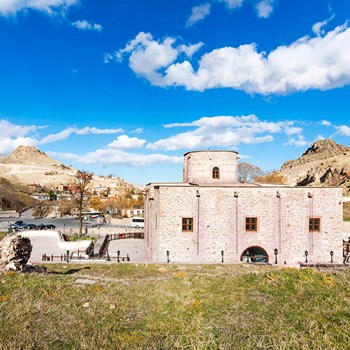 Aya Eleni Church is one of the must-see attractions in Sille, and it was built by Helene, Constantine's mother. Helena who was the first Christian aristocrat tried to find the holy cross of Jesus during her lifetime and visited Jerusalem many times before building churches along her way. This church was one of the examples of her time.

After the Turkish Seljuks arrived and took over Konya in 1071, there were many non-Muslim families who fled the city. Many of these emigrating families may have moved to Sille which is relatively close to Konya.

Sultan Kilic Arslan I had evacuated the town and moved the people to mountains in 1097, after a first attack of Crusader's to Konya. After some time Crusaders occupied Konya and Sille.

We can learn from the surviving records of the time that many Greeks, who helped in the army when Alexios I entered Konya around 1116-1118, eventually returned to İstanbul. This meant a significant reduction in non-Muslim population later on.

In 1146, Emperor Manuel of Byzantium sieged Konya after defeating Sultan Mesud of Seljuk in a battle near Philomelion (Aksehir); then he fought against Seljuks again in front of Kevele Castle. Ioannes Kinnamos describes that the Byzantine army had burned down the suburbs of Konya. Aside from the wars, natural disasters have also had devastating effects on the population of Konya. One example is the plague outbreak which happened in 1153 and caused many casualties.

Charles Texier, who visited the region in the second half of 19th century stated that there were summer houses of Armenians and Greeks in the area. According to records from Treasury and Land Registery at the beginning of 20th century, 56 percent of residents in Sille were Muslim while 44 percent were non-Muslim. After 1923, the Christian population of Sille had migrated to Greece because of the population exchange.