Siirt Grand Mosque, built in the city center of Siirt, was constructed by Iraqi Seljuk Sultan Mugizuddin Mahmut in 1219. The building's architectural design is rectangular and oriented east-west. Siirt Ulu Mosque consists of a space covered with 3 side-by-side domes sitting on an octagonal drum on the qibla side, two vertical barrel-vaulted sections on the east and west sides of the domes, and one section with 2 transverse naves and a vertical nave to the north but close to it.

Between 1229 and 1985, Siirt Ulu Mosque underwent a major change in plan that resulted in many changes of the building's original state to the current. 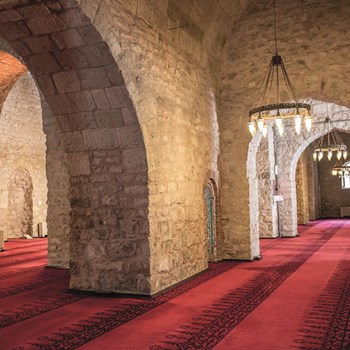 The body of the Siirt Ulu Mosque's minaret is divided into various ornamental belts which narrow as they ascend. It resembles a style of minarets that prevailed during the Seljuk and Atabeks periods in Anatolia. The opalescence of glazed bricks, utilized by medieval Seljuks in Iran and Atabeks in Northern Iraq are not as prevalent as those found on said minaret.

Siirt Ulu Mosque minaret; It has a special place in Anatolian architecture with is architectural and decorative features. In the construction of the building, cut stone, rubble stone, brick tiles as decoration and Khorasan mortar as binding material were used as the main materials.

The Siirt Ulu mosque has been surrounded by one and two-storey reinforced concrete structures in the last century, resulting in the building becoming unrecognizable from the outside. Because of conservation projects prepared by Bitlis regional directorate for foundations, restoration work was completed between 2008-2013. Private property around the building continues to be expropriated and external repair works have been partially completed on southern and western perimeter walls.