Sifaiye Madrasah is located in Sivas city center and was built by Anatolian Seljuk ruler Izzeddin Keykavus in 1217. The building was used as a madrasah during the Ottoman period.

Sifaiye Madrasah is one of the oldest hospitals in the world that has stood for centuries . With an area of 3400 square meters, it continues to be one of these well-known Seljuk institutions with innovations in brickwork, tiles, inscriptions and relief figures before being a copy of its founding charter which survives to this day. 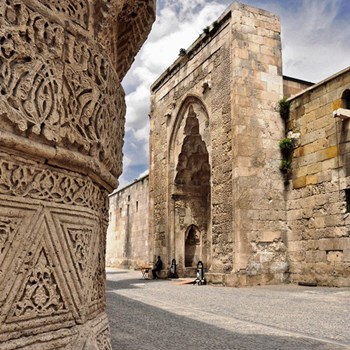 The southern iwan of the madrasah was reserved as a tomb for Izzeddin Keykavus, who had it built, and died of tuberculosis in 1220. It is not known who the architect of the hospital was.

This hospital, which was destroyed during events such as the defeat of Kösedağ, which caused great destruction in the city, and Timur's occupation of Anatolia after Kadı Burhaneddin fell; became a classical madrasah that gave religious education to those living in Sivas when Ottoman rule came.

The building was used by the military as a warehouse for goods and supplies during World War I. The hospital was restored by the Turkish Historical Society in 1937.

The madrasah is made of single-storey cut stone. The courtyard measures at 690 m² and has thirty rooms surrounding the porticoed area. Stone, brick material and tiles were used in construction. Emphasis was placed on decoration for the portal, window borders, and central iwan. The lions at the corners of the entrance arch symbolize strength and health. The door is decorated with elegant motifs in the form of intertwined stars. The corridor that is passed after the portal leads to the madrasa with a courtyard and another door. It's estimated that what's now opposite the inner door was originally used as a physician's practice section, and there are reliefs of human faces on both sides of this main iwan. On one side there is a female head with her hair knitted in the front, opposite which there is a bearded male on his knees with sun rays emerging from him. The word-i tawhid (the phrase where God's name is mentioned) is written around both the male and female relief.