Sidyma is an Ancient Greek town of Lycia at what is now the village of Dudurga Asari in Muğla Province, Turkey. The location lies on the southern slope of Mount Cragus to the north-west of the mouth of Xanthus. 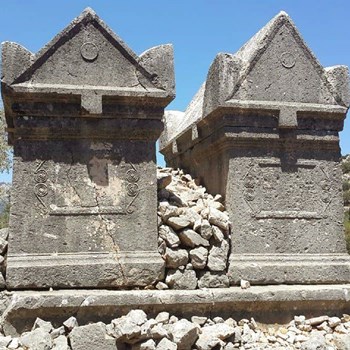 The inscriptions and coins uncovered in Sidyma show that the history of the city dates back to 1st century BC. The development was shown during the Roman Period, and continued into Byzantine times.

Sidyma acropolis is surrounded by walls that measure 3 meters in length and depends on the location of the ground. In the east, an ancient watchtower draws attention. A little further on, there are traces of a theater which dates back to late antiquity. The theater was mostly underground though six rows can still be seen today. There also seems to be many monumental tombs belonging to kings scattered about in this region too.

The Stoa in the middle of this village, which has been well preserved over the last 2000 years and still stands today, was built during Claudius' reign (41-54 AD). Just to its right, a 9 meter long Temple of Artemis occupies that same era. Just inside the entrance of the residential area is the partially buried bath house and church from when it was first established. Sidyma's historic rock tombs are most famous for their unique pigeon hole design; similar to what can be found in Pınara. However, these pigeon holes resemble derelict houses or ancient sarcophagi more than anything else. .